This weekend was the first time I have genuinely enjoyed myself since I got to Raleigh, and it was lovely! Here is how it all went down:

Wednesday: After my meetings in the morning and afternoon, I went and got a haircut in preparation for… 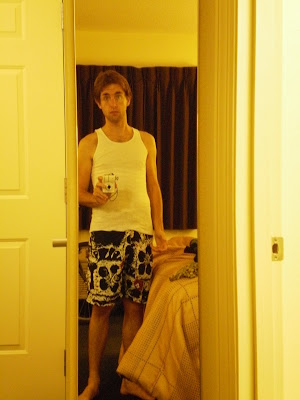 Thursday: …when I went to get new glasses and a new prescription. Unfortunately, the optomitrist was all booked up and so I had to come back on…

Friday: After my morning workout routine. I was forever at the optomotrists, but luckily, the girls who worked there were hilarious. It was cookie Friday; I got some. Unfortunately, I was so late that I didn’t get to spend a lot of time working. Shabbat was upon us. I could have been a bad kid and worked on. But I had seen some flyers and read some blogs. LOVE BUG was calling out to me. Not really understanding what it was, I went back to the hotel to freshen up before heading to the 101 Lounge, downtown, for the Great Bug Draw Off.

What “Love Bug” turned out to be was a timed, competitive, spectator art show for charity. So at the outside bar of the lounge, they lined up artists who had tags on their backs like marathon runners. There were two preliminary rounds of 25 minutes where, in their chosen medium, local artists would scramble to produce bug-related art on 8 x 10 cards as fast as they could. Each time one was done, a moderator would lift it up, show the crowd, and then walk it inside. Most cards were sold before they left the stand; each was $25. The crowd often pushed into the street. The artists from each session who sold the most were advanced to the last round of 15 mins in which larger more elaborate pictures were created. All the proceeds benefited non-profit Toxic Free NC, whose stated goal is to remove dangerous chemicals from the hands of children. Fantastic.

But why is this important? Well, the 101 lounge certainly made a killing selling bug-based drinks like the Bee’s Knees. But what to note is that, while there was a swarm outside, more discerning folk would see that the lounge had two stories! And large portrait windows all around. One side, naturally, was basically right above the bar where the worker-artists were humming away. So the queen seats in the house were inside, upstairs looking down perfectly on the art and the people. This is where the story starts.

Among the other queens enjoying such a visage, were a group of friends. Girls+. Sometimes some of them would go downstairs and communicate with the low-lying subjects in random-seeming walks. In any event, it was fairly clear that the binaries and norms of the colonial subjects were at least questioned from such great heights. After all, there is more than one way to make honey.

Woefully friendless in Raleigh prior to this point, I rectified my situation by spending a few hours casually chatting with this interesting bunch. Thereby proving I was not some sort of owl or bat or bullfrog. I was invited to go see the opening of a photography exhibit at one of their coffee shops. They were tragic pieces in Black and White biographing the lives of local homeless.

Not wanting to say “Goodbye Forever” after this, we exchanged numbers.

Saturday: Shawn, who has moved to Maryland for graduate studies, stopped by for the day. We hung out, went downtown. Had dinner. Checked out their ridiculous live music in the park. We walked around and saw all of the civil buildings (Raleigh is the capital recall). Both of us wanting to drink more, but me having driven, we go and hit up a couple of euphemistically named liquor stores (“Campus Beverages”) and a Kroger. Porter, Sauvignon Blanc, cherry ice cream, and whipped cream in hand, it hits me. 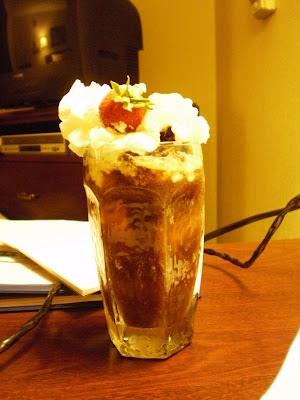 What if we take the ‘root’ out of Root Beer Float? A bottle of wine and Beer Floats later, Shawn and I were nicely toasted. We spend the rest of the evening entertaining ourselves on the Onion and Craigslist.

Sunday: Shawn and I head over to this delicious brunch place, southern style. Humid as boring sin, we sit outside in the heat. We go back to the hotel and sit off brunch for a bit. This is in preparation for going over to the mall across the thoroughfare and walking it off as well. We come back to the hotel and try to watch old stand up comedy on Netflix, but it fails. Shawn leaves me and Raleigh behind as he must need be in Lexington, VA that night. I go over to one of my favourite haunts in town and order my new favourite: cafe meiele. Somewhere in the middle of writing a paper outline, one of my new found friends calls me.

Wow! That was fast; I planning on calling or texting them to try to hang out on Wednesday if I hadn’t heard back. They were inviting me to a smore cookout / storytelling extravaganza. It was a very subtle blast. Suffice to say that I learned things about squid reproduction and sea cucumber survival tactics that I had never known before. Stop me if you’ve heard this one.

And now I am here, back in my hotel room, smoke seeped into my hair. But present in such a way that I feel absolutely free. I’ve got my Status Back, Baby.