Day 2: Believe it or not, the second day was when the pucky really hit the fan. Shane and I slept soundly the night before so we got sort of a late start. We saw the Tortoises a couple of more times on our way up to Hamilton Lake. It was another couple of thousand feet up over a short and steep trail. Serene and clam, the lake provided our lunch time spot at about 1 pm.

With plenty of daylight left to us, I posed the question to Shane on whether to press on to Precipice Lake or to stay at Hamilton for the night. Shane wisely lead us up and away.

If the hike to Hamilton was steep, the one to Precipice was worse. Notice a trend? On the way we come across a couple of guys making their decent. Apparently, they were trying to go from Giant Forest to Mt. Whitney in a mere 5 days. This leg of the hike was too much for them and so they decided to turn back and do some other route with their time. This was our first sign. Oddly one of the men knew about Eric Schwartz, whose t-shirt Shane was wearing.

Further up this leg, we meet a couple of other guys, also on their way down. We tell them that we are going to stay the night at Precipice. They tell us that there is snow there. We say “Great, we’d love to cool off!” They inform us that it would be well worth the 45 minutes to push over Kaweah Gap that night. We thank them and continue on. This was our second sign.

We loose the trail several times on our way up to the lake because of vast snow cover. This was our third sign. But we make it to Precipice and this is what we see… 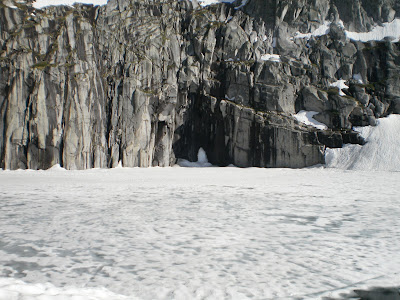 So Shane gets the question again!

“Do we press on or do we turn back and go to Hamilton?” It is 5:30 pm. Light is no longer a luxury. We need to make for a place to camp. Not wanting to backtrack after this ordeal, Shane orders the push over the gap!

The trail has been converted into a stream for most of the rest of the short and flat jaunt to Kaweah Gap. But hiking down the other side of the gap into the Big Arroyo Valley was easily the most dangerous and difficult part of the trip.

After taking in the sweeping vista for a few minutes, we decide that we need to make it to the valley floor and the trail (which we think we can see in the distance) before dark. Unfortunately, the trail is snowed out even worse on this side! The parts of the trail that we can’t find are now measured in quarters of a mile, and not yards. We don’t know where we are going and we can’t see how to get there. In a word: Lost.

‘Down’ is the best, chilly, dusky guess we can muster. But the hillside is steep and snowy. And where it is not snow-covered, it is rocky and rugged. It does not take us long to arrive at an impasse that we can’t simply walk down. I think for a moment. I look around again. Then I remember a part in “Desert Solitaire” where Edward Abbey, being too lazy to walk down a snowy mountain he had climbed, decided that it was much easier to slide down a snow drift.

Ding! Off go our packs and shoved in front of us, they lead us down 60 feet that we could not have walked down, to the next ledge. Thanks Eddie-Baby, that trick worked…once. The next impassable portion was too steep even for that to be vaguely safe.

Here, there is a place in the rock that Shane and I can climb down and only have to jump around 5 feet to make it. However, there was no way for us to have our packs on and live. We considered lowering them down on ropes, but even that seemed risky. But! If we had good aim, we might be able to throw them to the next ledge down. Tricky business since the ledge we wanted to hit gave us less than a foot for margin of error with the width of our packs.

I asked Shane, “Is everything secured?” For each pack, Shane grabbed the top of the pack and I the bottom. One, two, three, and off they went! Amazingly they both made their mark! Mine almost went over the far edge, but thankfully did not.

“Shit!”, I yelled as I remembered that my camera was still attached to the outside of the backpack and probably took the brunt of the fall. Apparently, my brother safely secured his inside his attic… Even though I felt like an idiot, my camera ended up being fine (Wheeew).

We make it to the warmer valley floor and find the trail. We hike for an hour before making camp by the mosquito-infested river. Fuckin’ day two, I swear.

Day 3: We find ourselves today in a high mountain valley, on the wrong side of the Great Western Divide. We had crossed it the day before at Kaweah gap. We hike downriver, crossing several rivers and streams, until we turn off and up to the Little Five Lakes. We make good time and stop for lunch at about noon.

The next part of the trip takes us over Blackrock Pass, the next-southernmost crossing of the Great Western Divide. At this point one might consider us bored by words like ‘snow’ and ‘rock’. Or barring that experts at traversing them. No.

Blackrock Pass offered new and exciting ways to loose the trail. On the way up, the trail was out as often as it was in. I’d often scramble up over rocks to get an elevated perspective on where the trail re-emerged. I’d shout out the information back down to Shane, who was not so dumb as to hop over anything with a full pack on. Finally, we see Blackrock itself. And between it and us is the largest snow field I have ever seen in June. What must have been at least 400 yards across, it hid the trail and thus any idea of where we were actually going.

Brief patches of trail-like land appeared for 10 feet or so before disappearing back into snowy anonymity. However, most of the snow is below a certain elevation, like salt collecting in the bottom of a bowl. Unfortunately, once we make it beyond the vast snow, we have the side of the bowl to deal with.

I know I have used the word steep previously. That was a misuse. Making it to the top of Blackrock Pass was steep. Angles of 75+ degrees, hands-and-knees on jagged rocks steep. Somewhere between this, ~65 lbs on his back, and an elevation of close to 12,000 feet, Shane started complaining that he wasn’t feeling well.

Crap. We *have* to get over this thing! Tonight! I give him the pep talk about no trail being hard if you are willing to spend the proper amount of time on it. We take frequent breaks. At long last we make it. It is very very windy at the top. 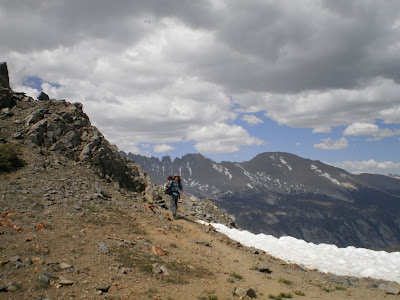 That night we hike down to the Kaweah Middle Fork Valley giddy at our accomplishment. Oh, and the ability to walk downhill. We make camp at Pinto Lake and Shane sets up the hammock.

Day 4: Mosquitoes drove us fast and early that morning and we make excellent time: 7 miles before lunch at Redwood Meadow. There we meet a creepy guy who wanted to show us a ‘special mushroom’ that he thinks he can find again… We declined in feigned interest of feeding ourselves.

Our goal is to make it to the foothills, camp, wake up the next morning and go to Buckeye Flats and hitch a ride back to our car. Nature had other plans.

While in the middle of a creek, it starts to rain, lightning, and thunder. This is the backpacking equivalent of being caught with your pants down and your junk in a melon or any vegetable halfway up your cootter-hole. We get the fuck out of that creek.

We throw our rain gear on and take a sweaty run farther down the mountain to where it is no longer raining. Between the great time we made that morning and being recently propelled by weather, we make for Buckeye Flats that night.

Somehow, near dark, we do end up getting there and finding a camp-site. We had walked 23+ miles that day. In the last 28 hours we had gone from an elevation of 12,000 feet to a mere 3,000 or so. Our bodies were spent. Food and sleep were the only conceivable things.

Notice how Asian tourists doing Karaoke by the fire at the camp next door wasn’t on that list? They didn’t!

Also, recall the calm and professional way we handled that bear from Day One? Yeah, no one at the camp site was there for that, so they all freaked the hell out.

It really is amazing what will keep you awake when you are that tired!

Day 5: The next morning which hitched a ride back to our car, as planned. We went to Three Rivers, took a shower and then drove back to Santa Ynez.

As Shane said to me at one point, “I don’t think I like pain as you.” This trip was incredible!