It was the best of times, or some other Dickensian nonsense. Paris was much more enjoyable than I had anticipated. The city, if done right, can be quite pleasant. The conference was better than expected as well. I even enjoyed one of the plenary sessions. The first panel was my Nuclear Engineering dream team sans el Baradei.

My photos can be found here. But by far the best experience I had went as follows. Picture it, I had just had dinner with my co-worker, a two crepe and coffee course, at a little place near the backside of Notre Dame. She needed to get back to the hotel to prep for her talk the next day. I had seen on the map “Place Dauphine” on the other end of the island in the Seine on which that great cathedral sits. Being a Jeanne d’Arc fanatic, I was of course interested in a park dedicated to her liege-lord. Is it right for a Jew to have a patron saint all picked out (break glass in case of Catholicism)? Likely a topic that will take a separate discourse to answer. It was 9:30 pm.

On my way, I noticed at the rear of the church-under-remodel Cafe Esmeralda and I said to myself “Hah, you cannot trick me; I have read Victor Hugo and know your little game.” Further on I stopped and took pictures of dramatically lit gargoyles. Then it happened. 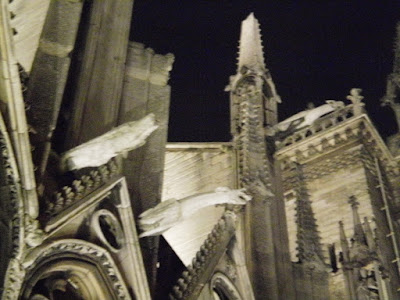 Turning the corner to the front of Notre Dame there were people. A lot of people. A crowd. Even better this throng seemed to be dedicated to the noble task of blowing bubbles. Had I just wandered into the best flash mob ever?! Yes. Clearly, these were my people.

Eventually, a large man with short black hair, a large black satchel, wearing a black suit with a white shirt came by. He took a bubble vial out of his bag and handed it to me. I knew what to do. 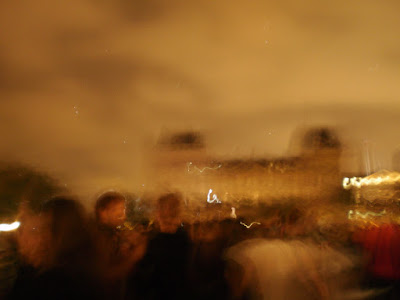 White dots in sky are bubbles reflecting the camera flash.

But knowing only brings further questions. What was this all about? Right as I was about to leave, after the photographs, TV cameras, and inquisitive police, I saw her running around speaking perfect English. “Can I have another bottle?”

After Carla got a second serving of the miracle stuff from our provider, she ran off blowing with reinvigorated enthusiasm. Carla was lithe and hyper-active. She wore classy black cargo pants, a black sleeveless top, and a simple gold cross necklace. Her hair was Red. Char Aznable red. The kind of dark/bright red that is in no way natural but cannot be begrudged on those grounds. It was cropped short and tipped black.

Of course, I asked her what all the bubbles were about. “Who knows?! I was told it is a Celebration of Life!” Check. We wandered through the throng blowing bubbles for a bit longer. It turns out she is a Neurobiology PhD student in Bonn and was in Paris for, what else, but an international congress. Her English was so good because she had previously spent 10 months working at an equestrian hospital in Oakdale, CA (near Sacramento). “We should go see my co-workers.” Mate.

I spent the next hour or so blowing bubbles and hanging out with these four awesome German biology PhD students. They were all pretty neat. At one point, they busted out beers from a small cooler they brought with them. So now my canonical view of France is sitting in front of Notre Dame, amongst babes and bubbles, complaining about Corona and the superiority of darker brews.

Is it a function of my personality that I get into these situations? Or is it my wacky life that has thoroughly skewed my persona? The chicken is cooking scrambled eggs, surely.

At one point Carla asked me what I did for fun. “This! Celebration of Life,” I answered. By now I had put together the obvious similarities between the current situation and the Burner Community. Keeping it simple I said, “Have you hear of Burning Man?” Her excitement was palpable. She was unaware of any German burns, but her year in California taught her what she needed to about what happens in the desert. She wants to go, but it is that much more expensive with the intercontinental flight.

But what she does for fun is analogous. She, somewhat obviously, is into Metal. So she goes to all of the big European Metal concerts. So we start talking about metal bands we like or have seen. I’ve seen Tyr; She has seen Dio; I am jealous.

This spawned a conversation between her and one of her co-workers about what was actually good. If you have never seen two passionate Germans argue about what ‘real’ metal is, then you have not lived. Their focus was only broken half-an-hour later when an androgynous French child in desperate need of Ritalin ran by. Her/His disengaged parents were on the other side of a shrubbery managing the one still in the cradle.

We supplied the kid with a bubble bottle. It’s contents were quickly dumped onto the ground after the little lips failed to produce the desired soapy effect. 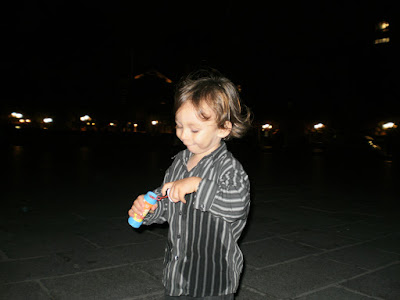 Somewhere in all of this the flash mob broke up. They were replaced by drummers and a girl in Arabian pants spinning poi on the steps of Notre Dame. The whirling balls of flame, naturally, attracted our ADHD adoptee. When mein klein homunculus ran straight for the fire was the only time I saw the mother step in and stop her ward.

Sitting there, I thought to myself, “Esmerelda lives!”