Shit! It has been a week! I really am not getting to write as often as I need to. Such brief solace, my tabula rasa overfloweth.

I am not going to ramble on about what I have done in the past week. The following few statements will have to suffice. I went to Irvine and saw many people I love deeply, but sadly missed others. My father left for a business trip to Japan, placing me in an all-awkward, semi-parental role. My maternal units have had a rough shake this time. Naturally, I feel behind with all of this going on. 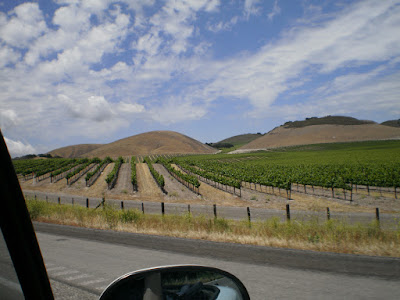 The above is a picture from the car on a recent trip to Santa Maria with my mom. It has really only been that nice weather-wise three or four days since I have been here. Sad that the sunny and wonderful is now the climatological exception. I am certain that this is getting me down.

In LA, with Meenon, I went to see this hip show called “Gaps in the Fossil Record“. It was about a 65 yro Palaeontology professor who falls in love with, marries, and impregnates his 21 yro student. The show begins when the newly weds move in with her mom, who is naturally closer to the good doctor’s age than her daughter. Complete with a post-apocalyptic twist at the end, the show was amazing.

It was one of those only-in-LA kind of experiences. The playwright for this work in progress has acted in such films as “The Mask of Zorro” and “Gods and Generals“. The mother figure was played Nancy Charles, who has been in everything. It was top-notch and I am always happy when Meenon takes me to these neat things.

Additionally, my brother Shane was in a No on Prop. 8 dance theatre production this last quarter called “Everyone Deserves A Happy Ending.” He plays the movie star guy, one of the two male leads. It is about 15 minutes long. It is in two-parts on YouTube (below).

So please watch it if you can. As you can see, they mix a lot of dance types in one piece. I find the jurisprudence tap-battle genius. If I dare say it, the other male lead (Eli) played his role with a hit of Buster Keaton. And on a personal note, it is deeply satisfying to be able to truly tease my little brother about the fist time he kissed a boy there being lights, music playing, an audience clapping for him, confetti in the air, et cetra. I am very proud of him.

A large part of my time in Irvine was spent with my cousin Andrew. One of the things he introduced me to this time out was the HBO show, “Rome“. Rome is ridiculously good. However, the spice that kicks it out of the water is certainly Lyndsey Marshal as Cleopatra.

I don’t know how to express how I feel about her / this role / that time. Perfection falls somehow short. So I’ll let dear ol’ coz do it for me. He called me a “Fucking Fetishist”. And if that isn’t the most exalted redundant phase in English, I’d like to hear the other contenders.

And then yesterday, I was listening to an episode of the Savage Lovecast (ep 138) where he was talking about the true versus ironic usage of the word ‘fetish’. Thus spake Merriam-Webster:

“*An object or bodily part whose real or fantasised presence is psychologically necessary for sexual gratification and that is an object of fixation to the extent that it may interfere with complete sexual expression.*”

Damn it! I guess they are right… I always sort of prided myself on having a tertiary openness to other types. But the jig is up! Maybe I should drop the mask and try to confront my desires more head on. Thoughts?

If you want to know what my fetish object is, Lyndsey Marshal as the opium-addicted Cleopatra in the 7th episode of ‘Rome’ is a genuine specimen. This is not to say that Lyndsey Marshal herself is a necessary component for my sexual gratification. I am a fucking fetishist, not a fucking creep.