The Thought Process of a Computational Scientist

This was originally published at inSCIght.

To appease the PI, our hero - the dashing, young scientist - faces down the following problem with moxie normally reserved for Marie Curie.

In 2D or 3D, we have two points (p1 and p2) which define a line segment. Additionally there exists experimental data which can be anywhere in the domain. Find the data point which is closest to the line segment.  Please see Figure 1. 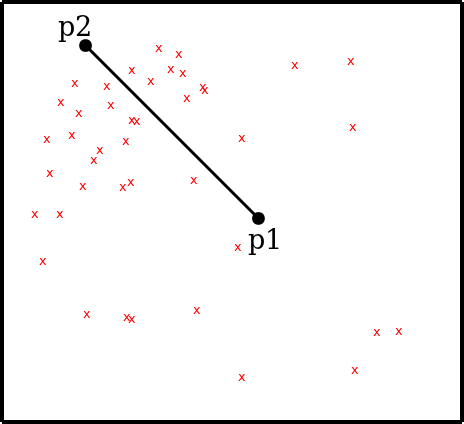 Instinctually, our code-slinger reaches for an off-the-shelf solution. Most of the time this is the correct thing to do..  This is essentially a minimization problem and we know that SciPy (and other similar packages) has an API that should be able to help us out. With about 2 minutes and Google, our hero finds the scipy.optimize.fmin() function and tries a solution like the following:

While this approach certainly works it is a little like swatting a fly with a tank. In some sense, this solution is order O(n^2) because for every data point we perform and optimization. Then we have to solve for the minimum-distance data point afterwards.  For a large number of data points, all of the calls to fmin() can get quite expensive.  So while this solution works it lacks grace.

At this point the plucky researcher notices that minimum the distance from the data point to the line has an analytic solution.  This is great!  It means that all of those nasty fmin() calls can go away and we can make this problem O(n).  But what is the equation? Recalling back to trigonometry, the stalwart champion notes that in general 3 points (p1, p2, pdata) form a triangle. 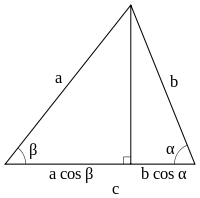 From Figure 2, a may be calculated from the distance between p1 & pdata, b from p2 & pdata, and c from p1 & p2.   Therefore shortest distance between the data point and the line is just the height of the triangle, which is given by h = a sin(beta).  To calculate any of the angles the Law of Cosines can be used.  For instance, beta = arccos((a^2 + c^2 - b^2)/(2ac)). Furthermore, note the inverse identity sin(arccos(w)) = sqrt(1 - w^2). Therefore, the new closest point and line distance functions would look like: 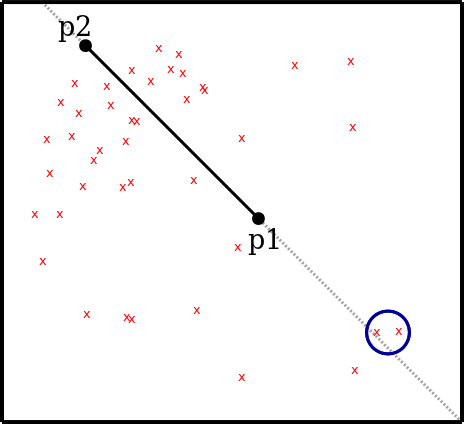 Figure 3: Close to the line, but not the line segment.

These points have a very small height as compared to other data points but the triangles formed by them have a very large perimeter.  This leads us to the third and simplest implementation: minimize the perimeters!

This has the advantage of performing fewer floating point operations than using the trig functions in option 2.  Moreover, it is conceptually simpler to understand what is happening just by looking at the code.  By minimizing the perimeter we are minimizing the area of the triangle which happens to minimize the height of the triangle for the data points we care about.

Up until now, our hero has shied away from trying to do any code optimization. We were just trying to get to a solutions that works without excessive computation times.   However, almost immediately from attempt 3 we can see that the length c (between p1 & p2) is the same for all data points.  Therefore this calculation is redundant for minimization. We can thus replace the perimeter function with something that is sufficiently perimeter-esque but requires even less floating point arithmetic.

While this only works if p1 & p2 do not change, it will outperform any of the other options.  This makes it suitable to use on a large number of data points.  Finally because the above is so simple, we can use NumPy’s vectorization capabilities to reduce this whole problem to a single line:

By continuing to think about the problem we end up with the simplest and quickest solution which also happens to be the most concise to write.  We could have stopped at any point and had a solution that would have worked. We went from a 25 line version to a single expression. What is more, is that this solution works for any number of dimensions since three points always form a triangle.

Having the simplest, most general solution has distinct advantages. This code will not often need to modified in the future because of the variety of  cases it satisfies.  Moreover, should the code ever need to be revisited it is possible to look at the whole thing in a single glance.

Much of good software development - and scientific code in particular - must make the trade off between human time and computer time.  In general, human time always wins.  At any of the checkpoints in this evolution we could have stopped.   Thus they key engineering decision to make was at what attempt the code is “good enough” to satisfy the vast array of other requirements:

With that, the triumphant hero returns home from the lonely cafe to have a delicious vegan victory cookie!