Hey Cowboy, This post ain’t for the weak of heart!

I had the most incredible weekend! 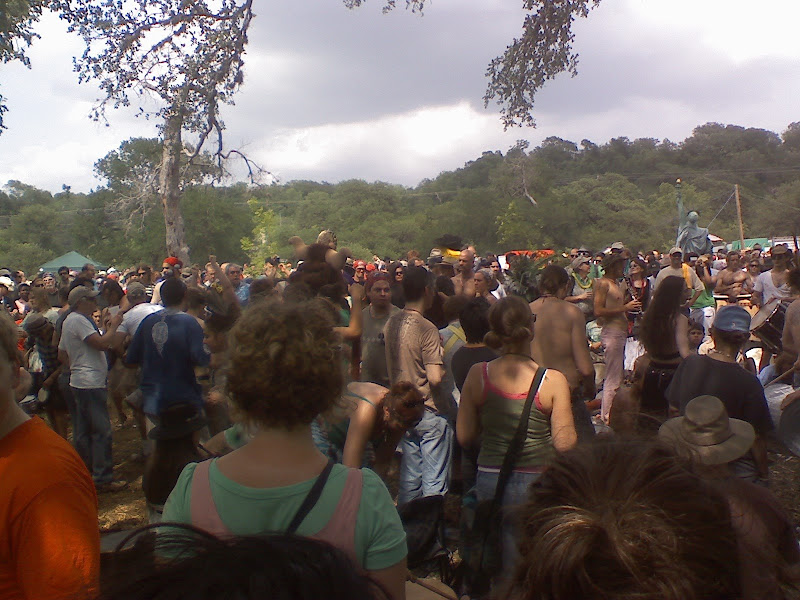 So it started off of Friday night with me sending out my PhD Proposal. This, of course, left me a stringless, dessicated husk of a man. Therefore I proceeded to go to a show at the Vortex called Mr. Z Loves Company. I went with my friend Jayme. It was amazing. I guess the show was about Mr. Z’s repressed homosexuality.

I loved it! I mean, how often can you pay to see that sort of thing. And so cheap! I continue to be impressed by the Vortex.

But then, the next day, Saturday, came Eeyore’s Birthday. This is a big hippie bash where people come all dressed up with their freak kids. Fucking Incredible. The picture above is of the drum circle that I jumped in and out of many times. Dancing = Hardcore.

How the hell I missed this the previous two years I have no idea! It takes place in the park right down the street from me. With thousands of people! I only knew about it this year because of Jayme told me the night before after Mr. Z’s (See how this all ties in?) Next year, everyone? Seriously, I took a picture with Twinky Freidman! And my sweet lord, the women! You know how I get excitable when I find one girl who outwardly breaks enough norms for me to be interested in them. This was like swimming through a sea of them! Is this what it is like to be straight-laced? That almost makes me want to be normal. Almost. For comedic effect.

We may secede tomorrow; get to Texas while you can!